Tagore Speaks to the Twenty-First Century was self-published in June 2016. It was based on my PhD thesis but modified for the general reader with little or no knowledge of Tagore, ‘to provide a new platform for the great Indian social reformer Rabindranath Tagore (1861-1941) to communicate his ideas’. I wanted the book to be a relaxed read, uncluttered by footnote numbers and citations, so I removed all but an abbreviated set of notes, plus bibliography and index, enough for anyone interested to follow up my sources. I also chose 12 point font size and had the book ‘limp sewn bound’ so it opens easily. But my good intentions were frustrated, perhaps because of the unfortunate timing of the publication. Readers new to Tagore have seen it as too specialised. Tagore scholars have appreciated it but not promoted it. Copies for university libraries have not been requested. The paypal button on this website has not been pressed. There was also a problems with the book being shown as unavailable on amazon (it was available on the UK amazon but no one looked for it there).
I have produced other writings on Tagore and I’m hoping to publish another book, but I decided to make a last effort to communicate Tagore Speaks by publishing it online, in an early version (not the thesis text which is different) with all its notes and references. I hope that anyone citing this will request a copy of the book – available for £10 ($13, 858 INR), to contribute a little to the printing costs and cover international postage – partly to refer to page nos. but also because I cannot be sure the online text and the printed version are identical, since I made some changes at the proof stage.
I divided the text into 8 sections as follows:

B6 The Religion of Man

But do please buy a copy of the book: http://tagoreanworld.co.uk/?page_id=152 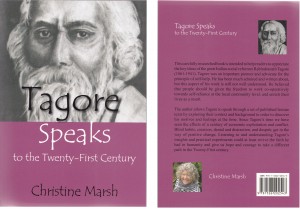